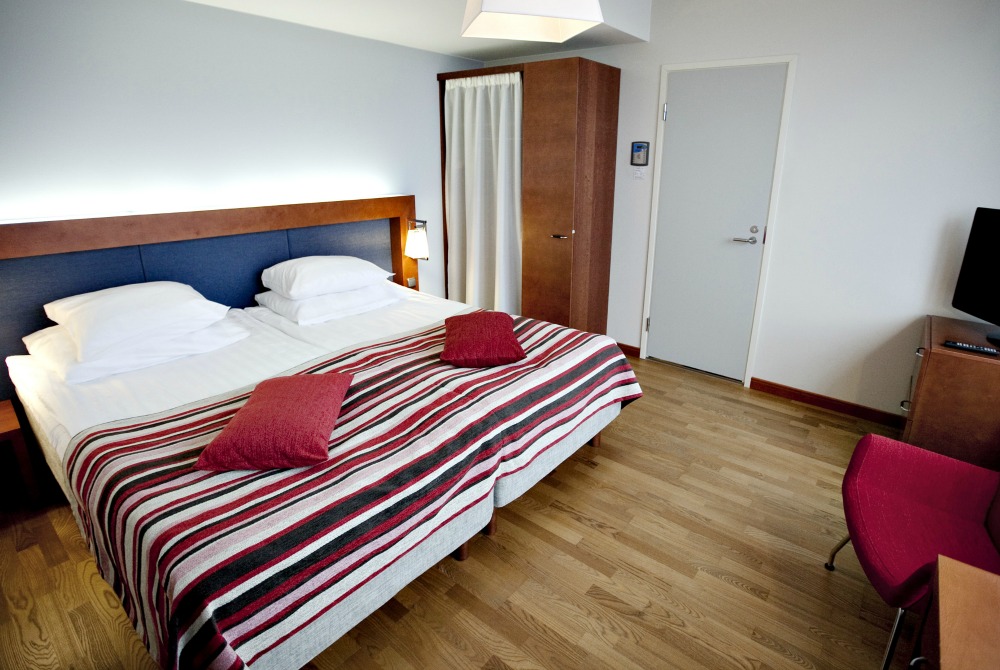 Original Sokos Hotel Arina is a classy and lively hotel in the heart of the city of Oulu. The hotel has its benefits being situated between two great landmarks of the city; on one side there is the pedestrian street Rotuaari with its famous meeting point Pallo, and on the other side rises the brand new Shopping Centre Valkea.

The seven-storey hotel itself has 260 cosy rooms, including 3 great suites and rooms with a private sauna and jacuzzi.
There is a gym room free of use and a playing room for children in the hotel, and in the lobby you ́ll find a small shop selling local goods and snacks.

The hotel has four popular restaurants: Southwestern-style Amarillo, Frans & Cherié Bistro (known before as Fransmanni, totally renovated and re-opened in August 2016), Grill It!- restaurant with a char grill and Vanha Paloasema Bar with live music on the weekends. There are also two beautiful cafeterias Coffee House and Makia right next to the hotel.
New Ristorante Rosso has also been opened in Shopping Centre Valkea – there we have a special pizza oven which is heated by wood. There is also a new Scandinavian style Restaurant Veranta on 3rd floor in the hotel, which is a place to enjoy the hotel breakfast. Otherwise Veranta is open on request for groups and events.

Original Sokos Hotel Arina has its new, stylish and modern meeting facilities in the Shopping Centre Valkea 4th floor, and in the conference area you ́ll find beautiful surroundings suitable for 6-200 people.

Being the fifth largest city in Finland, Oulu offers its visitors plenty of tourist attractions and year-round activities. Oulu is the biggest urban centre in Northern Scandinavia and 250.000 citizens are living in the Oulu region. In Oulu region, you can create a versatile vacation by combining urban pleasures with activities in arctic nature. The center of Oulu is full of nice shopping opportunities with a great accommodation and activity services.

More about the destination Oulu »»

These stories on Hotels